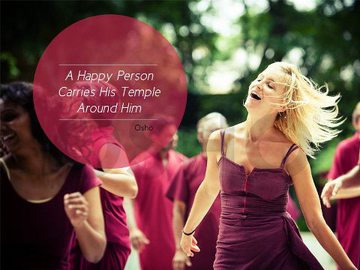 Osho Rajneesh, aka Bhagwan Shree Rajneesh was an Indian mystic, guru and spiritual teacher. His international following has continued beyond his death.

A professor of philosophy, he travelled throughout India during the 1960s as a public speaker. His outspoken criticism of politicians and the political mind and institutionalised religion made him controversial. He advocated a more open attitude towards sexuality and was integral in introducing teachings in tantra. In 1970 Rajneesh settled for a time in Bombay, initiating disciples (known as sannyasins) and assuming the role of spiritual teacher.

In his discourses he reinterpreted the writings of religious traditions, mystics and philosophers from around the world. Moving to Pune in 1974, he established an ashram which attracted a growing number of Westerners. The ashram offered therapies derived from the Human Potential Movement to its Western audience and made news in India and abroad because of Rajneesh’s provocative lectures.

Osho’s ashram in Pune is today known as the Osho International Meditation Resort. His teachings emphasize the importance of his active meditations, awareness, love, celebration, courage, creativity and humour: qualities which he viewed as suppressed by adherence to static belief systems, religious tradition and socialisation.

Rajneesh’s teachings have had a notable influence on Western spirituality, as well as New Age movement. Those who give his defined bodywork treatments and trainings are widely-sought therapists doing deep healing work for the body-mind connection of many. They often combine their trainings to suit the individual needs of the client.